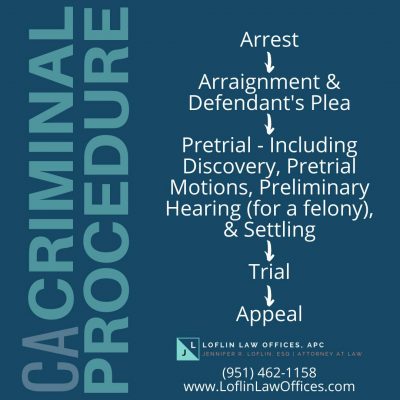 Criminal proceedings can be complicated. In California, a criminal case begins with an arrest. Once arrested, the prosecutor (i.e. the district or city attorney) reviews the police report and decides to file the same, fewer, or greater charges. Then, the defendant is:

At the arraignment, the judge informs the defendant about the charges and his/her constitutional rights. The defendant then enters a plea:

After, the judge will release the defendant on his/her “own recognizance” (promise to later return to court) OR send them back to jail if there’s no set bail or until the defendant has paid bail.

The next step, prior to trial, is discovery – where the prosecution and defense exchange information about witnesses and evidence they’ll present at trial.

Additionally, at this time,

In a felony, the judge will also hold a Preliminary Hearing to decide whether there is enough evidence on the defendant committing the crime to make him/her appear for trial.

If there is, the prosecutor will file a document called “the Information” and  the defendant will be arraigned a second time to enter a plea and proceed to trial. For trial, a defendant has the right to select between a jury trial of their peers (with the lawyers choosing the jury in a process called voir dire) or a court trial.

At trial, each side has the right to give an opening statement, followed with presenting evidence and witnesses, then closing arguments, and finally finding the defendant not guilty (aka an acquittal) or guilty beyond a reasonable doubt. If appealed, the appellate court can review the evidence to determine whether there was not enough evidence to justify the verdict or judgment and/or there were mistakes of law that hurt the case. To learn more, contact us. (951) 462-1158

Criminal Law – You Have Options