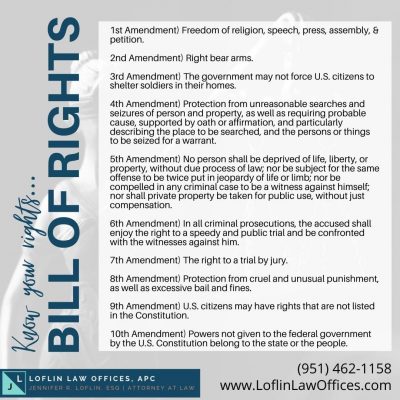 3rd Amendment) The government may not force U.S. citizens to shelter soldiers in their homes.

4th Amendment) Protection from unreasonable searches and seizures of person and property, as well as requiring probable cause, supported by oath or affirmation, and particularly describing the place to be searched, and the persons or things to be seized for a warrant.

5th Amendment) No person shall be deprived of life, liberty, or property, without due process of law; nor be subject for the same offense to be twice put in jeopardy of life or limb; nor be compelled in any criminal case to be a witness against himself; nor shall private property be taken for public use, without just compensation.

6th Amendment) In all criminal prosecutions, the accused shall enjoy the right to a speedy and public trial and be confronted with the witnesses against him.

7th Amendment) The right to a trial by jury.

8th Amendment) Protection from cruel and unusual punishment, as well as excessive bail and fines.

9th Amendment) U.S. citizens may have rights that are not listed in the Constitution.

10th Amendment) Powers not given to the federal government by the U.S. Constitution belong to the state or the people.

Criminal Law – You Have Options